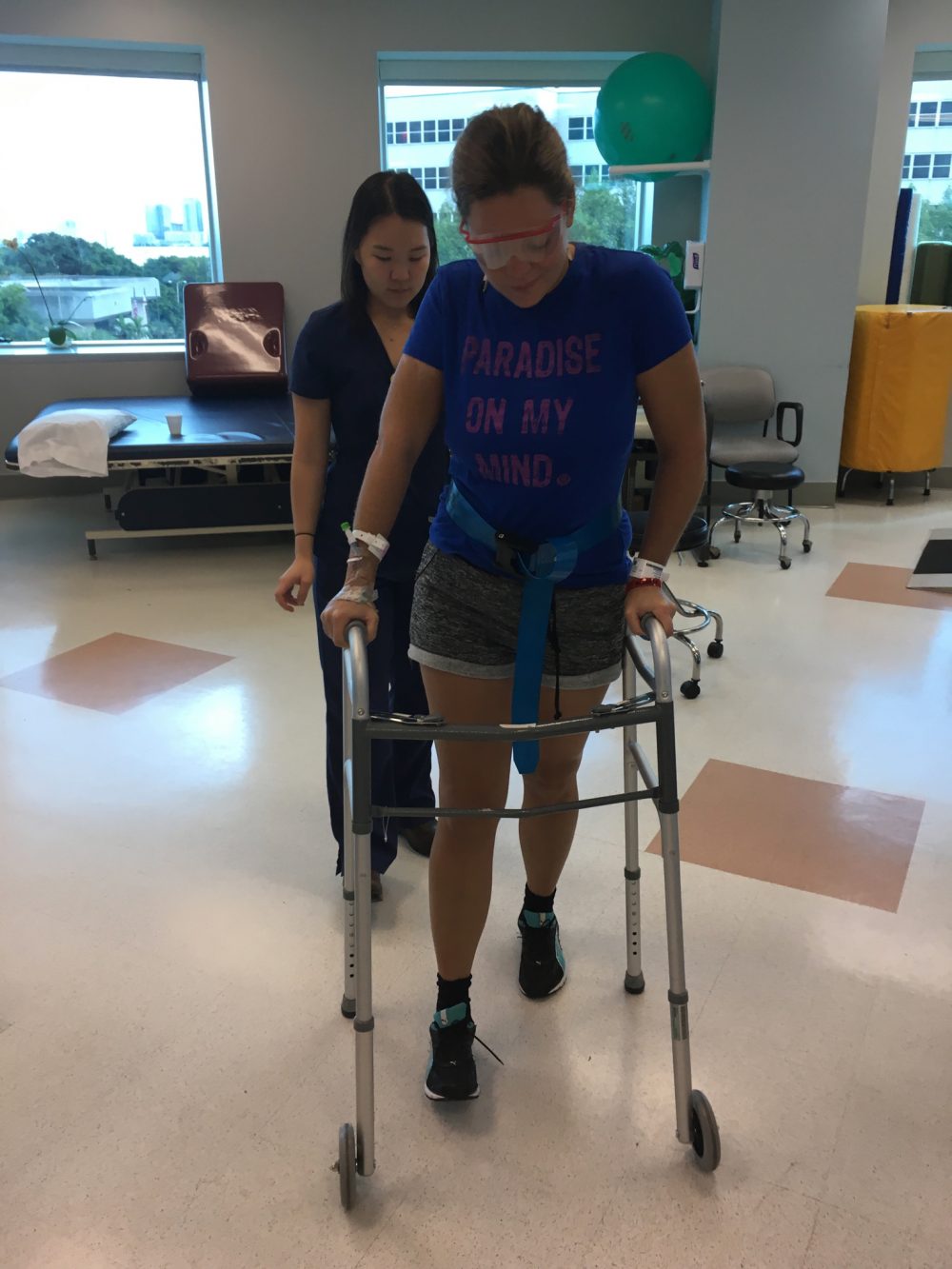 The hospital in Miami got me out of bed, into the wheelchair and standing with help. They told me I had to move around using a wheelchair. I thought of how impressive the wheelchair basketball team always looked. I wanted to get that style of chair so I could train and join in. Unfortunately, I was paralysed down my right side so my right arm was no good at pushing the wheel let alone catching a ball!

The hardest piece of equipment I had to learn to use was introduced – the Zimmer Frame. My Frame had two wheels at the front and two stoppers at the back to help me push it forward. I hated it, it was very difficult so I came to the conclusion that it was broken, not me! We were sent home with a wheelchair and Zimmer Frame. Perseverance was needed with the Zimmer Frame as it was the only way I could move around the house. Someone had to be with me when I was using it as I could fall backwards because I had no true sense of balance (I was constantly dizzy). I leant on the Frame a lot making the palms of my hands bruise so my brother bought me some padded weightlifting gloves for comfort, haha.

Other bits of equipment that really help are the frames that are placed around a standard toilet and the portable shower chairs. These can be placed at the sink and used in the shower for both washing and drying.

Progression onto using a knee brace minimised my dizziness by preventing my right leg snapping back and giving me more stability. This allowed me to take more steps before I became tired. As I had no feeling it was quite frustrating knowing what and how I wanted to move, but my body just didn’t and it would give up without warning.

Walking practice outside without the Zimmer frame began. We only took the wheelchair as backup for when I would tire or we went through a busy area.

As I tire my balance gets worse so to compensate for that a walking pole was introduced. Initially, I could only coordinate and control one pole and two feet. Now I can use two poles in rhythm. We need to be mindful and vigilant of any blisters occurring on my hands due to the pole grip and I found that cycling gloves help to prevent these. The poles also seem to have a mind of their own as the day gets later and often trip Ian up!

I now use the poles, a leg brace and a Lycra sock for more efficient walking (see their blogs) and can concentrate on more general equipment designed for distance walking.